Where do I even begin? The anger in my body or the fear in my mind. Sacred to walk alone in the dark. We, all Indians have normalized Rape. One rape happens as often as 16 minutes in India. I have to admit it was getting unbearable to open up the news paper and see another girl lose her life because she was raped and then left for dead. I see so many posts on my social media and each one breaks my heart. It builds in this fear, ‘what if I was next?’ It builds up anger, ‘Why isn’t anybody doing anything about it?’ Then I realize I am anybody. We all sit in our chairs, read about these cases, shake our head and move on with our life hoping that somebody will do something about it. That the police will do something about it, when we know in our hearts that maybe that girl will never be brought to justice. I mean how can she when half of India still thinks it her fault that she was brutally raped. Now, don’t get me wrong, men get raped too. But this isn’t a fight for gender, it is fight against sexual assault. Since, screaming, fighting, shouting have not worked, let’s go back to the old ways and talk.

In 2019, 88 rape cases were reported everyday and these are just the cases that were reported. Imagine how many people actually got raped and didn’t come and fight for themselves because they were afraid of the society. The society we created. 10 Dalit women get raped everyday. In a place where women get rapes everyday and many times lose their lives too, the conviction rate only stands at 27.2%. Which means, 72.8% of woman don’t get justice plus the people who didn’t report it at all. You say live freely, but how can people walk alone in roads when a rapist may be out there. I don’t need to give the statics to tell you that things are bad, we all know that things are bad. It takes 7 days for Rhea to be arrested and 7 years for Nirbhaya to get justice. I guess that’s the place we live in. Where entertainment is given more importance to than sexual assault and safety of the citizens. Media wants to cover which celebrities consume which drugs but do’t cover the important things. The things that matter a lot more than some celebrity scandal.

The nation is outraged and if you’re not you seriously need to have a look in the mirror because rape is not okay. The fact that people of this country have normalized rape is absolutely disgusting and heart-breaking. A 20-year-old Dalit teenager was gang raped and then allegedly murder in Uttar Pradesh’s Hathras. The woman was cremated without the consent of any family members to allegedly remove all evidence. She was burned and then cremated. Nobody deserves that fate, nobody. This will keep happening, if we don’t speak up now. This is inhumane and immoral in every way possible. It’s hard to even express my thoughts and feelings because no word in the english dictionary can ever describe a heinous crime as such. We need to be able to use our voice for what’s right. Not just people in India but everyone. This is a crime against humanity. If you have even a little decency left in your speak up. Speak up for the sake of every woman in your house. Speak up so another woman, like Manisha won’t lose her life because boys weren’t taught how to treat women. 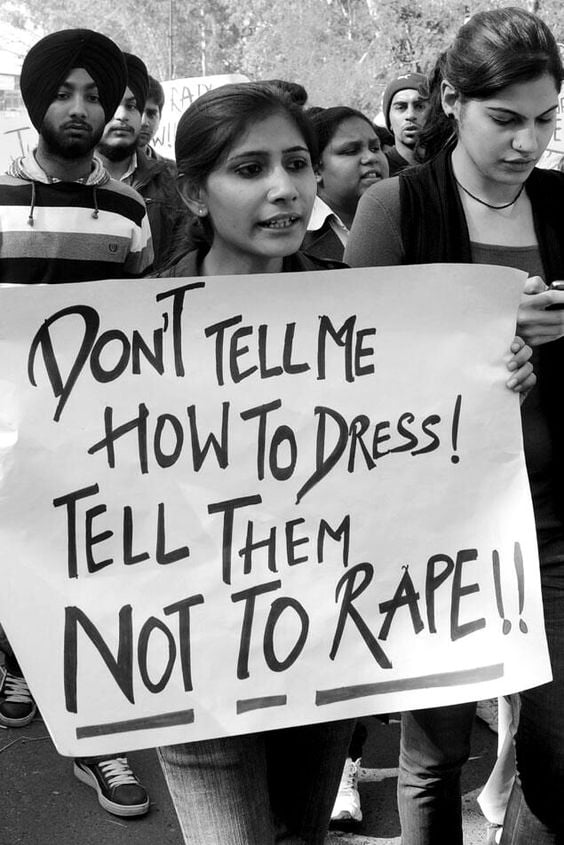 We are a society are so focused on teaching girls what they should or should not do that we forget women aren’t the problem here. We as a society as equally responsible for what happened to Manisha. If boy’s were taught to look at women with respect she would still be alive and well. Don’t teach your daughter how to dress but tell you sons to not be rape. Teach boys that women are not sexual objects. Don’t fat shame or body shame a girl because of the length of her dress, teach a boy to keep his eyes elsewhere. The truth is we spend so much time tell girls how to live their lives when we should be teaching boys how to treat woman. It’s women who need to be educated. It’s both genders so somewhere in the future, another person wouldn’t be raped and lose their lives. All parents, all teachers, all principals, just teach your kids about sexual health. It’s important. They are going to find out anyhow, might as well help them do things correctly. It’s not so hard to sit your students and children down and talk to them about these things because if you don’t they will end up learning something that is wrong. Something horribly messed up and you won’t be able to stop it. You can be shy and have your child do something wrong or help your child understand the consequences.

‘Beti Bachao, Beti Bharao.’ A very famous slogan in India, printed across falls and flyers. It roughly translates to, ‘Save girl child, Educate girls.’ Clearly this does not work. Because women are raped and murdered everyday and some can’t even come out and fight for themselves. It’s time we change this, ‘Save the world, educate the world, not just girls.’ It’s time everybody learns something because if we don’t crimes like this will happen again and agin and again with no end to it. Teach boys how to behave and then hold the justice system accountable for the rapists that roam free in the world. We need to be strict. So a humble request to all ministers, it’s time. It’s time that every girl that has been raped is brought to justice. Not after 7 years because that doesn’t even feel like justice anymore. Get the rapists within 24 hours of the crime. That person who suffered the faith did not even get a chance to fight back. They make any mistake and definitely didn’t deserve what happened to them, you can’t let the rapists walk freely. They deserve to get punished. For the safe of humanity and sanity of not only all woman but for every person who seeks to exists.

It’s finally time we get fight. Fight for all those girls who were never brought to justice. Fight for every lost soul because we as society failed to teach between the right and the wrong. It’s about time we do something about this. It’s time that girls aren’t taught what to wear or when to leave the house but to teach men how to look at a woman. Rape is not the victims faults. Clothes have never determined consent. So STOP justifying this act because there is no possible justification for this crime. If you don’t think this is a problem, you need think hard and well about who you are. If you are as mad as I am, use your power. Fight in the best way you can. Use your social media’s to make change. Use whatever power you have to stop the rape culture. Stop normalizing rape because rape is not okay. We all have to fight this so not another girl is rapes and murder as brutally as Manisha. So that not another girl would have to fight for her life. So that people think twice before touching a female. So that next time, the rapists are arrested within 24 hours of the time or less. Let’s use our powers for a better society. A society where a girl won’t have to fear for their life if they walk on streets or take the bus or the train. Do it for women who were raped but were never given the justice. Use your voice for Manisha. Use your voice for your sisters, mothers, daughters and wives. Do it for all the woman. Do it for yourself.

Since I couldn’t do to the protest, this is for Manisha and every other sexual assault victim.

I am mad why aren’t you?

It’s Not About All Men Being Pigs, Or Women Being Sluts: Bengaluru Mass Molestation