A SLAP IS STILL NOT OKAY!

One slap. It may seem like nothing. Like it is no big deal. We can try and justify it with, “So, What? It was just a slap.” But no, one slap is still not okay. Living in India, this attitude is very common amongst the people. You’re either the person who tries to justify the slap, or you’re the one being abusive in the first place. So why do people think a certain way, especially in India. The india law states that both assault and battery is illegal in India and is in fact a punishable offense. One slap, just one slap comes under battery. The truth is we all know nobody ends up behind the bars for a simple slap because that’s how the society treats it. Some scared and oppressed to even come out and say that they being abused while the others can do something about this problem and stay quite anyways. So why is the society this way. Why do we teach our children that abuse is not okay and yet treat one slap as someone’s right.

A slap is never just a slap. It shows the lack of understanding and respect, not to mention the complete lack of humanity. A slap does not make you stronger. It shows how easily bruised ego you have and how you chose the easy and violent way out when you had plenty other options. We can all agree that cheating is immoral and completely unacceptable, right? So how do we not understand that a slap is also immoral? Several people try to justify a slap by the some means. There have been many cases, where men and women slap each other in a relationship and try and justify it by saying the significant other was cheating. That is not how things work. Like I mentioned, if cheating is wrong and immoral so is a slap. Stop trying to justify why you slapped someone because the truth is, that either way it is not okay.

Sexual violence is most common is relationships, especially in a country like India. Every other woman gets slapped and we wave it off as if it meant nothing. Why? Instead of telling your daughters and sons that tolerate this because it means nothing teach then that violence of any sort is completely and utterly unacceptable. It shows complete and absolute disregard for somebody else. Violence, is quite common is many relationships across the country and because of the attitude that people have towards it is ridiculous. The truth, If you did love someone you wouldn’t slap them because you would enough respect for them that way.

The problem with some relationships and how violence becomes a part of it is when someone makes a mistake. We all make mistakes, some bigger than the other’s but there is always a much better way than to start abusing your partner. However bad the mistake they had made, you don’t get to decide their fate for them. By slapping them, you are punishing them and that is again not okay. There is much easier and civil way to get out of this problem and it is simply to break things off. Not only would you be coming out a better person but you wouldn’t have to live with the guilt of hitting someone just because you were so angry that you let out your wrath on your partner. The simple way is to walk off.

Many people in relationships who have been abused treat it as if it means nothing. Like maybe they must have deserved it but no. When you are in that cycle of physical violence you hand your power over to the other person and that is never good for anybody. Stand against violence, not for it. If someone slapped your anybody from your family, how would you feel? Would you be filled with rage? I think we all would. So stand against violence. If you are being physically, sexually or mentally being abused, report the person. Get out of that place and when people tell you that that it was just a slap, tell them off. 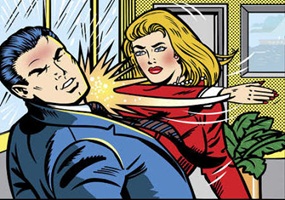 There are some Bollywood movies that give the wrong impression to people while there are some that are metaphorically a slap on people’s face. One movie which became a huge sensation in India in 2019. This movie is the 3rd highest grossing movie in the year 2019. There were some people who came in support of this movie while there were others that against it. Kabir Singh an adaptation of the South India movies Kabir Reddy, became huge not only in India but internationally too. Kabir Singh was a movie filled with violence. Two minutes into the movies someone is already out of breath with blood streaming down their face. Of course, most people just skip through the this violense and go to protest against the violence in relationship between Pretti and Kabir.

In my opinion, because the movie was filled with so much violence I hated it. The short tempered character is possessive, aggressive and a complete misogynist. His attitude towards life is the famous saying My way, or the highway. All characters in the movie were completely intolerable. The concept that should have worked amongst the people, finding love and beating all odds, the message that the movie gave away was from from anything good.

While watching the movie, the only person I truly pitied was myself having to sit through a 3 hour movie about sexual abuse. The main character’s egoistic ways of life were not only a headache but encouraged the viewers to be possessive and and completely manic about someone they have a creepy crush on. Kabir Singh was a stalker and the first half of the movie only taught me that if life someone stalk them. But then’s not even the worst part. If someone does not listen to you act with aggression or there is nothing a punch in the face can’t solve. If something is happening in your relationship, instead of working things out together, slap your partner. Then finally when things don’t turn out the way you won’t cry over someone and get drunk the person you never respected in the first place.

The problem with Kabir Singh is not the movie itself. Yes, the movie is probably one of the worst I have seen and given a completely wrong message supporting violence in relationships and other forms of abuse as well. The movie is a clear reflection of society. There are still people out there that think hitting someone is the only way out. Or hitting someone is a way to show them that they are wrong. Many people came out and expressed themselves and put out their view against the movie, yet we overlook the part that even today, this happens in many household around the globe.

All movies are not as bad as Kabir Singh, there are some movies that support the right cause. “Thappad” was an incredible movie which was metaphorically a slap on people’s thinking and the notions of the society. Thappad was about a female, Amrita, who who lived in a monotonous yet happy marriage with her husband. This was until he publicly slapped her when he didn’t get his promotion that he had been working on since years. That slap changed her life as she realized how unfair everything in her lie had been. How she had to leave her passion behind after getting married. It was about the little things wrong with the society on a serious level.

The movie was a perfect reflection of the existing society. Amrita’s mother, as well as her mother-in-law consoled her by telling her that it was just a slap, or that a slap was not a big deal. When she wanted to get a divorce everyone told her that her decision was wrong because there was no reason to file for a divorce because again, it was just a slap. Everyone around her knew that the slap was wrong but nobody wanted to accept that it was. The movie very well captured the emotions of the partner and his completed ignorance towards the entire situation. Amrita’s husband and Amrita’s brother only chose to see the loss of deal faced by Amrita’s husband. Amrita’s husband completely ignores the fact that he has slapped her in the first place. That everything was his fault. This still remains true.

The problem with one slap is that people think of of it as if there is nothing wrong with that one slap. As if it is their right to slap someone. Some people think that they can hit someone. That hitting someone is right and not wrong. The truth is even if it is just a slap, you can’t hit someone ever. Change you thinking for crying out loud. A slap is not a slap. Even if it is, it not okay. It never will be. So telling people, “So what? It was just a slap.” Enough!

The movie had many messages related to the daily sexism women have to face in the society. The story might be about a slap but it is so much deeper than that. I would recommend everyone to watch this movie because not only does it show physical violence in a new light but it also shows other problems that are overlooked by the society. These problems have been age old yet nobody does anything about it. This movie is one of my favorite because it did something that millions of other movies couldn’t. It was truthful and honest and showed the need for people to stop thinking a slap is okay.

A Slap is not okay

A slap in any context is not okay be it in a relationship, or against people you aren’t too fond off.  Domestic violence is not a problem against one gender, I’m taking stand against this culture. One slap can ruin someone’s life. One slap can change someone. One slap can do more damage than anticipated. In many cases people deserve more than a slap, but you don’t get to decide their punishment for them. You don’t get to be the one to decide whether hitting them is the right answer because it’s not.

Stop trying to justify violence! Stop telling people that it was just a slap! Stop making people’s decisions for them! Stop! Just Stop! A slap is not okay in any context because when a slap is not “just” a slap. It doesn’t matter, if it was hard or soft, it is still a slap. Violence does not actually benefit anybody. All it is a bad reaction for a bruised ego. If you are really angry, get a punching bag, don’t partner one. In case it does happen which it shouldn’t apologize instead of giving justifications, maybe they will actually forgive you.

Not that I haven’t said it enough times but, A slap is STILL not okay. And a Slap is not just a slap.

If you agree with me spread the word. Tell me how you feel about this issue yourself. Share this with people because domestic violence is a big problem in this country.